Node.js uses dgram library to implement the UDP datagram socket. In a computer network, UDP stands for User Datagram Protocol. This Protocol allows the computer application to send messages via datagrams from one machine to another over the Internet Protocol (IP) network. Before going into the further details of UDP it’s expected that you have the following prerequisites:

The code examples are available on a public Github repository for your reference. You can also check out OSI Reference Model to have a basic understanding of the OSI Model. We’ll be starting through the basic introduction.

Comparison between UDP AND TCP

UDP is an alternative communication protocol to TCP protocol(transmission control protocol). Both the TCP and UDP protocols send the data over the internet protocol network, so it is also known as TCP/IP and UDP/IP. UDP sends the messages in the form of datagrams, it is considered the best-effort mode of communication. TCP sends individual packets, so it is a reliable transport medium. Another difference is that the TCP is a connection-oriented protocol, and the UDP is a connectionless protocol as it does not require any virtual circuit to transfer the data.

As we know that UDP is an unreliable protocol, but still we require a UDP protocol in some cases. The UDP is deployed where the packets require a large amount of bandwidth along with the actual data. For example, in video streaming, acknowledging thousands of packets is troublesome and wastes a lot of bandwidth. In the case of video streaming, the loss of some packets couldn’t create a problem, and it can also be ignored.

UDP transfers data between two computers in a network in a simple fashion in comparison to other protocols. It sends packets directly to the target computer, without establishing a connection first, indicating the order of said packets, or checking whether they arrived as intended.

The step-by-step processes to send packets over UDP are listed below:

Node. js is an open-source, cross-platform, back-end JavaScript runtime environment that runs on a JavaScript Engine and executes JavaScript code outside a web browser, which was designed to build scalable network applications.

We’ll be using Node.js to build the UDP server and Client in this blog. If you are looking for getting started with Node.js you could follow through with the getting started guide.

Now, let’s first check the node version to get started with creating a UDP application. Open a terminal or command prompt on Windows and run the following command to check the Node version:

I will be creating two files server.js and client.js inside one directory for ease. 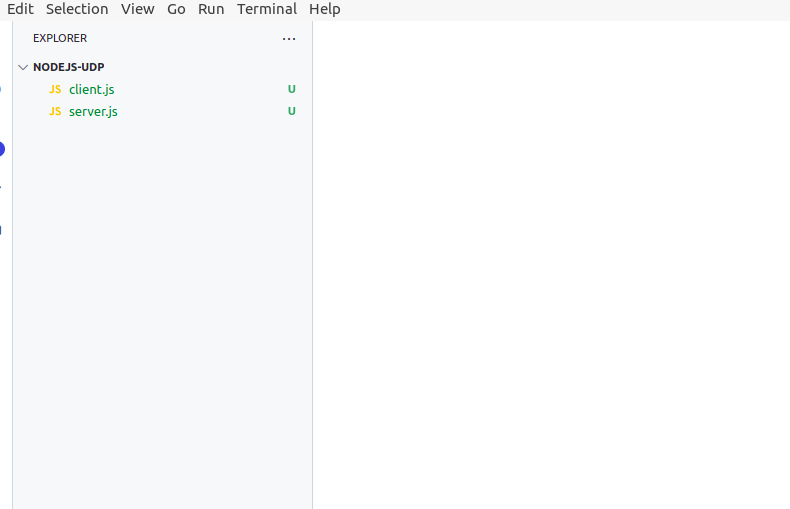 In this tutorial, I will be creating a simple UDP client/server application. The server will be listening on a specific port in which the client messages will be received and will send a response to the client. And the client will send the server a message and wait for a response to its request.

UDP clients provide a simple method for sending and receiving connectionless UDP datagrams in blocking synchronous mode. Because UDP is a connectionless transport protocol, you do not need to establish a remote host connection prior to sending and receiving data. Node.js use dgram library to implement the UDP datagram socket. It’s nice to have a look. The following code snippet sends a datagram packet to a server specified by a port on our local machine and receives a packet.

As you can see, once the socket is opened, receiving a packet is very simple. And the code converts the Buffer array to string using the toString method. Info gives information about the source of packets.

The following code demonstrates how to implement the server for the above client. Now we’ll be creating a UDP server listening on port 2222 and waiting for the client’s request:

As I have created the client and server in different files, we need to run them separately. Let’s start by running the server first. Enter the following command on your terminal

Once the server is up and running you will see the output as our server is listening on the following port and address.

Now we can lunch our client to send packets to the listening server. Running the client will give you the following result:

As we see on the result the packets are sent to the server as the server receives the packet it will respond with a Message Received to our client as displayed above. If we see the server output once again we can see the packet send from sent converted to string on our server.

We looked at how to create a UDP client and server with Nodejs. I hope you have learned how to create simple UDP applications in node.js.